Cities evolve in awareness like human beings but slower

City of Tomorrow initiative AiREAS was analysed among the Smart City projects in Eindhoven and classified “peer 4” city development. Peer 4 is unique in the world and a major evolutionary accomplishment of both the city and AiREAS. But what are these layers of city development mentioned by the external analysts? And what does it mean for all involved?

There seems to be an important line drawn between peer 3 and 4. While peers 1, 2 and 3 are managed by the city executive through the establishment of a territorial hierarchy, peer 4 has totally different characteristics. Peer 4 involves core human values and value driven interaction with the city’s citizens in which there is no hierarchy anymore. Peer 1, 2 and 3 cities can be seen as destructive black holes that absorbe resources from their surroundings without any return. That is because the citizens and city both interact from a consumption point of view. Peer 4 suddenly transforms the black hole in a warm star that enlightens the surroundings with productivity and core values for life enhancement and wellness. City and citizens work together on those local core human values.

From an anthropology point of view I compare the city break through from peer 3 to 4 as a “second positive desintegration” at community level, proyecting on the “city’s awareness” the analogy of Kazimierz Dabrowski and the psyche of people. Also, if you like, the level 4 awareness based structuring applies, according MIT’s Sensing views (see below).

AiREAS is pioneer in this field of work

From black hole to star
Any city starts off as an unaware “foolish” conglomerate of people who, for what ever reason of submission, decide to group together under territorial command. Infrastructures are needed to host those people and create society of some sort. Time evolves and so does the city. The original submissive reasons for any person to come to the city transforms over time too. At one time the motivation was maybe the expected labor in town, now it may be housing, entertainment, care systems, shops and social securities. Many people don’t even decide to come to the city anymore, they are born there and for all they know it is the only reality that exists.

For many generations city governance, with submissive citizenship, was the norm. The city provides a promise of abundance at the expense of one’s human identity. The human being is simply “the consumer”. Nowadays cities cannot keep the promise of abundance. Huge global issues affect the local stability and sustainable progress. Abundance cannot be garanteed anymore even though it is democratically demanded by the citizens. The economic attractiveness and functioning of the city is questioned due to the shortages created by the conglomerate of cities themselves. The lack of productivity of the population makes any city into a massively destructive consumer of resources. Since 70% of the global population lives now in cities, and numbers grow every day, the destructive force of the cities can be seen as black holes that just take without giving anything back. It is not just the resources that are consumed that is devastating, the pollution generated by all cities together and the way countryside productivity has been adjusted to economic norms, produces a lethal natural unbalance.

Human awareness develops when people do things and subsequently enjoy the benefits or suffer the consequences of such actions. The interpretation of suffering develops our understanding of what we are (the “to be” part) through backward analysis.

First phase in life is learning through backward interpretation

We tend to mature in our understanding of life as we build up (painfull) experiences. At one point an awareness breakthrough is encountered. This is when our matured being starts to consciously determine what we do. We have learned so much about life’s mechanisms and essentials that we can anticipate and learn to create rather than destroy. This inner breakthrough is the one referred to by Dabrowski and a unique benefit of the human psyche. Unfortunately we have not yet based our executive leadership on these breakthroughs but gradually we will. 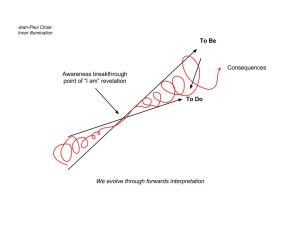 The awareness breakthrough is a real, memorable point in a person’s life

Peer 4 can be seen as a similar breakthrough but at city level. This is unprecedented in human history. It can be seen as a logical and evolutionary consequence of the times we live in and necessary for the survival of the human species. It is an inspiring act of group leadership that steps down from a hierarchical position to adopt a partnership role in a teritorial eco-system. 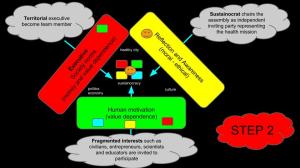 Sustainocracy is a peer 4 way of addressing regional sustainable progress

Eindhoven become powerfully aware of it vulnerability already in the 80’s when its major providers of employment (Philips and DAF) either went broke or moved their industrial processes to China. The pain of unemployment and corresponding social costs brought a severe crisis. It made the city reflect about its vulnerability out of dependence. This became the basis to convert into Smart City’s peer 3 with initiatives like Brainport. The city had become aware that it should remain productive even though this was translated primarily in product innovations for the global market. Triple helix is a typical peer 3 structure in which the three pillars for economic growth (government, education and business innovation) work together to optimize resources and results. Yet the triple helix is still focused on the world economic market of trade (to do). Brainport developed into a highly subsidized technology driven creative institute.

Eindhoven became the hotspot for creative product development but remained vulnerable in the economic context of demand and supply. Natural resources are increasingly being dealt with in a competitive manner as consumption peaks. Human consumption has its limits and inflation produces an enormous economic bubble that does not provide securities for all anymore. Poverty rises, migration starts and unbalance and insecurity becomes the standard. The city realizes at all levels (not just executive) that it needs to become much more self sufficient rather than competitive or consumptive. The main resources of the city are not its way to deal with economic growth but its talent to produce its own wellness. This understanding is a major breakthrough. Balancing value driven creativity with economic drivers becomes the deeper understanding of the essentials of life. A totally new way of dealing with one’s surroundings appears as well as the way citizens are seen in the city’s context, and how citizens see their city. Both develop empathy towards eachother and the objectives the community faces. Everything (governance, business development, education, behavior) starts to resonate with the higher purpose of quality of life in harmony with the natural surroundings.

While previously the city’s citizen were mere consuming parasites now they become primary resources for wellness driven creativity and productivity. Everything one can produce together one does not have to buy. The city’s economy balances out because it gradually becomes self supportive and self aware rather than vulnerably dependent of outside resources that it cannot control. The city develops awareness of its own core needs and takes responsibility by facilitating rather than controlling citizen’s interaction and productivity. It is not the city’s executive that leads anymore, it is the common persuit for core values that does. Both the citizens and the executive interact and adjust to produce the best results together. The entire city dynamics transforms.

Obviously the underlying peer 1, 2 and 3 infrastructural resources are still needed but they also need adjustment to the ecosystem that develops in the city. The city becomes self aware, passionate and energetic, less dependent on resources from outside. An energetic turn around can be felt. People in Holland state often “it all happens in Eindhoven” as they sense the warm and positive vibes. Its own resources sustain the city now, applying awareness, knowledge and tools for sustainable progress through quality of life rather than just trade.

Peer 4 transforms the city also economically. Since local values are created by the citizens themselves a local value sharing system needs to be developed. Citizens are no taxable parasites anymore but cocreators of wellness. People from outside the community can interact with the abundance created inside the city through financial means but those local citizens who put energy into the cocreation should be able to share the benefits without having to pay for it. Taxation transforms from money (VAT) over consumption to a sharing system of creative input and output for the city’s self sustaining progress. Housing is key to keep the value driven citizens in the city as the city recognizes that without them it becomes vulnerable again. The citizens become more important than the real estate which becomes functional to productivity rather that consumption. Also issues like pension-schemes become obsolete because peer 4 value driven interaction and contributions are not age but awareness dependent. A new dynamic interaction develops in which the elderly contribute and share as much as the youngest. Regards are measured in tangible reciprocity, not money. The city becomes less dependent on economy and more on social interaction and harmony. The city executive transforms and becomes more like the spinal cord and stemholder of the community than its brain. The community itself becomes the brain as the city starts to behave like a living body, with all its senses and core value awareness. Peer 4 transforms the black hole into a shining star.

In AiREAS we have been able to create and sense the warmth of our own creative powers and it is great for the city and all involved to be recognized as such. Any city can cross the line to peer 4 and we are ready to share our experiences of the new era that presents itself as more and more “black holes” transform in stars. All our progress is being documented and published through open access briefs. We use the global publishing channels of Springer and New Horizon Research. If you follow this blog you will be kept updated too. Also the global AiREAS Blog will provide you the specifics on progress around healthy city from air quality perspective.

A new leadership perspective and perception appears. For a short time both coexist in tension but after some time the persuit for harmony will prevail growth.

What is our narrative for the streets in cities? Gallery

What is our narrative for the streets in cities?