Laudato Si and me

When I published my Dutch book “Geheimen van echte welvaart” (Secrets of true welfare) in 2009, local Catholics repeatedly came to me with their surprise that “the Pope says the same as you”. This unintended allegation that the Pope would repeat my words rather than the other way around, was amuzing me. It is not at all strange that the patterns of evolutionary thinking between me and a theological institution like the Catholic Church show alignments. After all we both look at humankind from the long term existential point of view rather than the short term economical and political reality that is displayed continuously in our surroundings. Since 2009 this alignment has grown stronger as the current Pope, Francis I, dropped the tradition of dogmatic imposition of church laws to open up for a transparent, epistemological learning dialogue and action driven exercize to address the current humanitarian and ecological disharmony in the world. The first real encyclic of this Pope is called “Laudato Si” (Praise be on you) with the subtitle “On care for our common home”. The subtitle suggests a call for ecological awareness but the publication is much more than that.

Many converging viewpoints
The message of the Pope is clear. He formulates a learning dialogue in which he describes, in well chozen arguments, the firm beliefs, observations and theological foundation of the Catholic church. He invites other viewpoints to converge, not to dispute each other in competition or single dominant hierarchy but to open up in dialogue to actually solve the enormous issues we face together. The encyclic as such becomes a source of inspiration, no dogmatic ruling, yet an invitation to take responsibility as one would expect from a species that was created specifically by God for that purpose (one of the fundaments of this religion). The Pope analyzes the current situation of global economics, the throwaway culture, the lack of overall empathy to the destruction that we produce and seem so reluctant to deal with. He openly acknowledges that he nor the church has all the answers but hidden in the open dialogue, commitment to address the issues and diversity of standpoints, we can find the way forward.

I personally see this encyclic as a first sign of a new global force that sets aside the bureaucracy of dogmatic rules and inspires to open up to the spiritual inner quest for true meaning. The Pope may be critical, steering in some occasions with very firm statements but always underpins with arguments and analysis. One can agree or disagree (see media humor below when discovering the political hypocracy) with statements, arguments or analysis yet by giving the right example this Pope invites those who emphasize with the challenges to come up with better alternatives or take action with the same sense of responsibility as displayed by the Pope.

Three human levels
Theologist Eduardo Echevarria produced a theological analysis of the encyclic which was published in a national Catholic paper in Holland. People in my surroundings tend to share this with me to reenforce or put in perspective my own work. He expresses his worries that the huge diversity of complex issues (ecological crisis, climate change, poverty, apocalyptic risks, capitalist dominance, etc) expressed by the Pope may cause that “through the trees we do not see the forest” anymore. Echevarria tries to simplify by relating the build up of the encyclic to three theological levels of the architecture of human development (Compendium of Social Doctrine of the Church) :

When he started to elaborate on this it immediately gave relevance to the different interpretation and usage or positioning of those three levels. The word “level” suggests a “hierarchy” as levels tend to lay on top of each other, like this: 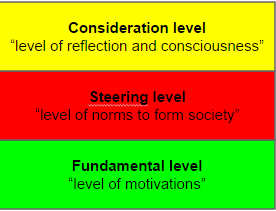 A hierarchy of levels?

When interpreting the levels as such we find that the level of motivations becomes mediated by the steering efforts of the norms of society if we want to access the level of consideration and reflection. This is probably the simplest illustration of the dominant position that the steering level can develop over our motivations, blocking us deliberately from reflection and the consciousness. It is not just the political and economical reality that wants to steer us this way. For a long time the church itself has considered itself as sole mediator between the religious interpretation of the conscience, translate it into dogmatic impositions referred to as the norms of Catholic belief and taking a dogmatic standpoint. Other religions do the same in their own way, sometimes producing even violent interpretations that influence the layer of motivations of those who are deprived from thinking for themselves and act through manipulation of “belief”.

In fact we see this wall of dominant steering determining today still the type of education our children receive, what we watch on television, how history is registered or how news is brought to our attention in a manipulated way. This brings me to this beautiful fragment of the movie “Dinner with Andre” (1981) (A conversation about reality) in which a city is described as a prison in which we are both the guards and prisoners:

The Pope’s mayor breakthrough
The mayor breakthrough of this particular encyclic is the Pope’s voluntary repositioning of the layers. Voluntarily setting aside its dogmas, the church is opening up to the overall redefinition of our steering mechanisms that form society. By doing so the Pope opens up to the critical self-reflective dialogue between the diversity of dominant and upcoming systems in relation to the challenges we face. Setting the example he invites other dogmas (economic, political, technological, scientific) to do the same and open up to reflection by involving directly the layer of motivations at humanitarian and ecological level. 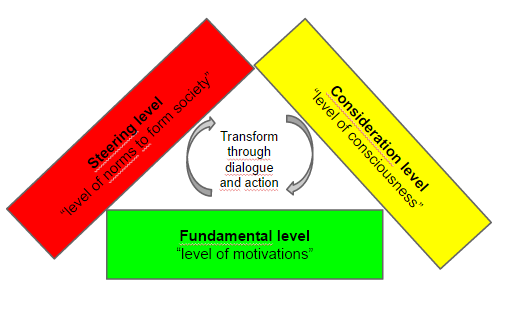 By stepping into the global societal group the Pope does not reduce the message of the church, he actually re-enforces it by placing it in overall perspective. The church is not the only truth anymore as other dominant realities are equally or often even more influential. It is one reality now among many others that reign today, yet one that is equally worth argumenting by analysis and interpretation in face of the huge human challenges that we need to deal with.

The Pope’s message is powerful because of the humility. Accepting different points of view and opening up the epistemological dialogue (What is knowledge? What is belief? What is real? What is responsibility?) the Pope `sacrifices` fragmented dogmatic dominance to achieve equality and purpose driven dialogue with others. By doing so he can focus on the powerful inspiration that the church provides while allowing for the influential contribution of technology, science, politics, education, humanitarian and ecological awareness and the involvement of the masses “because we are all in this together”.

Analogy with the City of Tomorrow
When I started the STIR Foundation (City of Tomorrow) in 2009 we worked very hard on awareness development, organizing congresses and establishing working groups. We provided a kind of critical message and structural DNA to work things out in purpose driven communities. Always we asked others to do the work, based on the inspiration we offered. The groups however formed around me as initiator of the processes and always looked at me with the question: “Jean-Paul, what do we do?”. This felt like a new hierarchy in which I was owner of a process and others had become my slaves. This was exactly opposite the ideology that I had for myself. I had no problem with taking the initiative for change but could not be asked to know how to produce it. If I could I would have done it long time ago. The fact that “we are in this together” also means that we have to “solve this together”. At one point I deliberately and openly decided to step back and let the group become a community with authority rather than puppets under my command. This process of pulling forward and letting go to achieve a combined forward action is key and extremely difficult in real life. While pulling the participating people (and institutions) feel the comfort of individual leadership that stands upfront (the Pope and his encyclic, or me and “JP what do we do?”) but when letting go (“we are in this together”) the group is asked to take a leadership attitude individually and together. The issue is leading, the sum of individual talent that deals with it produces the action in open dialogue and determination of priorities, not one single figure telling what to do.

That is why I feel highly identified with the way this Pope deals with the complexity of breaking through the barriers of the many dogmas that block our progress. He describes them all, including the church its own, and places them all in perspective to the challenges we face. Rather than “church ego” (religion says) he develops a “human eco” (including the church). He does not want to say what we need to do, he just explains the standpoint of the church in very clear wordings, and invites all others to do the same while focussing at the common issues at hand. “Laudato Si”, Praise be on you, is then a clear acknowledgement of the guts and commitment to think for yourself, gain access to the level of (self) reflection and join the group that redefines society by addressing the issues at hand together.

For me it is a further reassurance that the path we set out and developed over the years with STIR, AiREAS and the STIR community, as living examples of multidisciplinary group commitments, is now gradually finding fertile grounds to fractally spread around the world as practically proven multidisciplinary little engines of integral change. The papal encyclic has shown humankind that we have more choices that just the financial or technological dominance for our long term perspectives. And it is up to us to open our eyes and mind to make our choices.

What is our narrative for the streets in cities? Gallery

What is our narrative for the streets in cities?